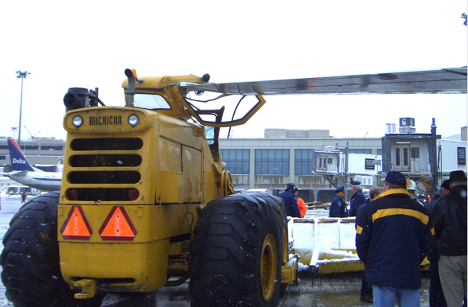 As a member of the airport snow removal team, what is your greatest fear?

CAUSING AN INCURSION or HITTING AN AIRPLANE?

Either of these events have the potential for disaster, not just for you but for any number of people on aircraft servicing the airport. A discussion on incursions is worthy of review as the winter storm season is upon us.

Definition: Runway Incursions (RI): An RI is any occurrence at an aerodrome involving the incorrect presence of an aircraft, vehicle or person on the protected area of a surface designated for landing and takeoff of aircraft.

VPD’s are the type of incursion that involves a vehicle or pedestrian. This number includes Snow Removal Equipment (SRE’s). The FAA reports that there was a 14% increase in VPD’s from 2017 and 2018.

Question: Are all incursions scored alike? Some seem quite serious, while others may involve driving over a painted line, but had no consequence.

Answer: NO. The FAA has 3 Incursion Categories:

Nobody wants to be involved in any kind of incursion. Even a minor (CAT 3) Incursion is a black eye to the airport

Did you know Kueper now offers a specialty blade for pusher plows? Feedback from the first users has been very positive. For more info contact Gardi Willis at 843-345-6788 or gwillis@kueperblades.com 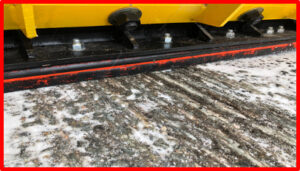 In an aircraft using the taxiways during a snow event causes an incursion, guess who the pilots will blame if they cannot see the pavement markings or signs identifying hold points? For operators of SRE’s, not only are the pavement marking and signs potentially covered, but wind-blown snow significantly reduces visibility.

Winter operations increases the number of vehicles on the runway. This fact alone increases the risk and opportunity for an accident or incident to occur. Multiple snow events in a single season exponentially increases the risk of RI’s involving Snow Removal Equipment (SRE). A synthesis report was written for the Airport Cooperative Research Program, (ACRP) “Preventing Vehicle-Aircraft Incidents During Winter Operations and Periods of Low Visibility (2008).” (Available at http://nap/14199).

The synthesis report cites 20 vehicle deviations in one FAA region during the period of the study. Nine of these deviations involved snow removal equipment of which six were considered serious. In each case identified, the snow removal equipment entered an active surface without ATC clearance. In some cases, the vehicle operators read back the clearance and restrictions correctly, but proceeded into the restricted area anyway.

There are many actions that may contribute to a RI. When considering Airport Snow Removal Equipment Operators, it seems likely that the following short list most likely presents the greatest risk.

Fatigue: Listed as Number 1 on this list for obvious reasons. When the storm is pending, operators get called in. It may be hours before the worst part of the storm hits. It’s not unusual to get called in late in the evening. Instead of going to sleep at a normal time, operators are getting their trucks ready or applying chemicals. When the storm reaches its peak, the operators and vehicles are working hard to keep up. There may be rest periods built in, but the type of sleep you get on a cot in the SRE building is not the type that leaves you rested and refreshed. It’s the nature of the business. Operators look forward to the overtime pay, but it is blood money.

Failure to follow established standardized procedures: Seasoned operators tend to know the airfield cold. They spend a good portion of many days operating vehicles on and around the AOA. They know how to communicate with ATC, and they know their vehicles. Why is it then that the statistics show that many of the incursions involving SRE is caused by an operator failing to “hold short”? In. many cases they failed to hold short after reading back instructions that included “hold short”. It seems clear that fatigue is a major contributor.

Poor visibility: Obviously, reduced visibility is a standard condition during a winter weather event. When the conditions near white out, it’s time to take a break. As visibility drops, the risk of collision with another SRE or an aircraft increases. There are other considerations that affect  visibility as well. Make sure the inside of the windshield and cab windows are clean. If the wipers are not clearing the windshield properly, they might need to be adjusted or replaced. Make sure there is plenty of windshield washer fluid. Keep extra in the truck in case it runs out during a period that you can’t head back in. Ensure that the defroster and windshield fans are not blocked.

Loss of SA (Situational Awareness): Of all the people who spend a considerable amount of time driving on the airfield, there are 2 distinct groups. Group #1, People who admit they have lost their situational awareness on the airfield, and Group #2, people who deny the times they have lost situational awareness on the airfield. The important thing to remember is if you are momentarily disoriented, pull to the side and try to get re-oriented. If you cannot, don’t take chances. Ask for help. You can call the Tower or another vehicle working with you. The embarrassment will be short lived. The consequences of an accident or incursion will be far worse.

Poor communications: There are lots of reasons for poor communications. Let’s start with equipment. Your radios should be cab mounted with a remote speaker located in a position that they can be heard clearly. A radio check before entering the movement area should be reported as “loud and clear” by ATC. Using a portable ATC radio is a poor choice during snow removal operations. Either the operator has to hold it in his / her hand or it is laying on the seat or dash. It is too easy to miss a critical communication. Changing channels on a  portable will usually require two hands. Not the best choice while driving a 60,000 lb. truck. The airport radio is just as important as your ATC radio. Make sure it is transmitting and receiving clearly before leaving the SRE building. Some airfields have “dead spots”, meaning areas on the airfield, where communications are often static filled or garbled. There are so many transmission waves from radios and navigation equipment, it’s surprising that there are not more areas like this. If they exist, be aware of them and plan accordingly.